Search among 12 available hotels with Airport Shuttle from 50+ providers 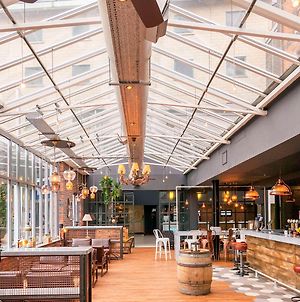 Novotel Cardiff CentreHotel
View on map1200 yd from City Center400 yd from University of South Wales - Cardiff Campus
Just a 7-minute stroll from Motorpoint Arena Cardiff and 15 minutes' walk from Cardiff Market, this hotel features an indoor pool along with an lounge bar.
8.2
Great10451045 reviews
From   US$ 94 /nightSelect
Not available 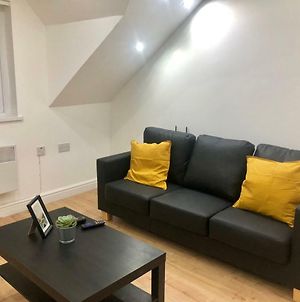 Relax In A Modern Cardiff Home By The City Centre & Bute ParkApartment
The largest option:
5 adults
2 bedrooms
3 beds
View on map1100 yd from City Center500 yd from City Hall
Nestled in Cardiff Outskirts district of the city, the venue is about 16 miles from Cardiff airport.
8.0
Great99 reviews
From   US$ 130 /nightSelect
Not available 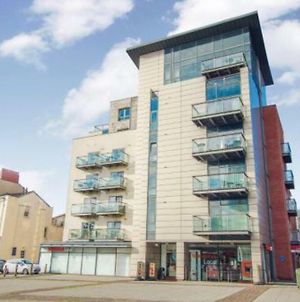 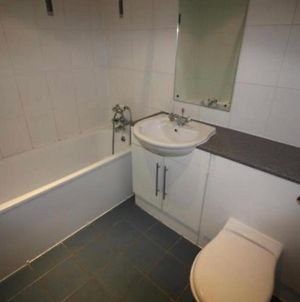 Millennium ApartmentApartment
6 adults
2 bedrooms
3 beds
400 yd from City Center200 yd from Principality Stadium
This property near Cardiff Castle consists of 2 bedrooms, 2 bathrooms and a kitchen for up to 6 guests.
7.8
Very good88 reviews
From   US$ 229 /nightSelect
Not available 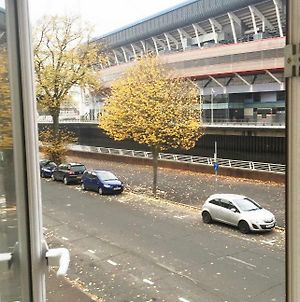 3 Fitzhamon Embankment ApartmentsApartment
The largest option:
6 adults
2 bedrooms
3 beds
600 yd from City Center300 yd from Principality Stadium
The apartment is 0.6 miles from Motorpoint Arena Cardiff and an aqua park, a tennis court and a golf course are available.
From   US$ 223 /nightSelect
Not available 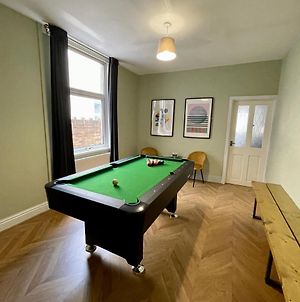 Edwardian City Centre Full House For Big Groups!Apartment
12 adults
4 bedrooms
5 beds
1100 yd from City Center600 yd from Cardiff Central Station
This 4-bedroom apartment can accommodate up to 12 people, within a 10-minute walk from Principality Stadium.
From   US$ 316 /nightSelect
Not available 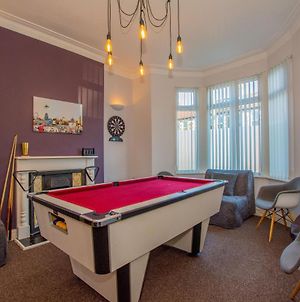 Riverside City Centre House With Hot Tub And Pool Table - Great For Groups!Villa
300 yd from City Center100 yd from Cardiff castle
Located 1.4 miles from Local art & crafts, the villa features a cable flat-screen and a flat screen TV.
From   US$ 381 /nightSelect
Not available 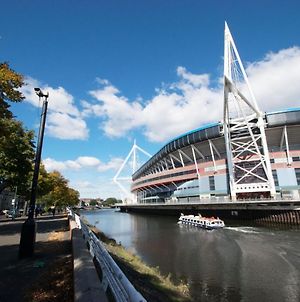 Hafan Y Ddinas Cardiff ApartmentApartment
6 adults
3 bedrooms
4 beds
600 yd from City Center400 yd from Principality Stadium
Placed 24 km from The campus, the property consists of 3 bedrooms, 2 bathrooms and a kitchen.
From   US$ 431 /nightSelect
Not available 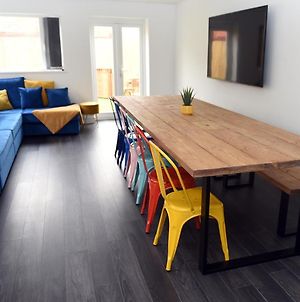 The Social - Cardiff'S Best For Larger GroupsVilla
1300 yd from City Center700 yd from City Hall
The property features views of garden along with 8 rooms and is set 0.2 miles from Cardiff School Of European Languages.
From   US$ 1 174 /nightSelect
Not available 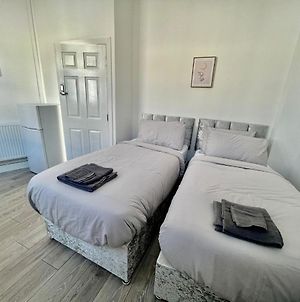 Cardiff City Centre Apartment- Penarth RoadApartment
1700 yd from City Center1200 yd from Cardiff Central Station
This 25 m² apartment with 1 bedrooms has a fully furnished kitchen, while being set 0.9 miles from the city center.
Select
Not available 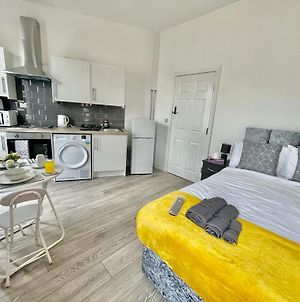 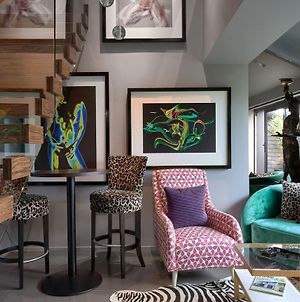 Millview - Luxury 4 Bedroom Penthouse In CardiffApartment
700 yd from City Center300 yd from Cardiff Central Station
This 40 m² apartment with 4 bedrooms has an equipped kitchen, while being set 0.4 miles from the city center.
From   US$ 3 174 /nightSelect
Not available
Saved
Save

Where to stay in Cardiff?

Nosda Studio Hostel and Nomad Backpackers are budget accommodation options in Cardiff with room rates from 81US$ and 76US$ per night. Downtown Cardiff is home to numerous budget hotels, like St Hilary Hotel and Holiday Inn Cardiff - North M4, that provide a 15-minute walking distance to Cardiff Students Union Great Hall. Modern Studios, Cardiff is an affordable choice that is directly adjacent to Dead Canary and offers room rates from 58US$.

With its proximity to Swansea airport, The Gower Hotel is a great option to stay in Cardiff before an early flight. To be near Cardiff Central train station, you should think of Sleeperz Hotel Cardiff in Cardiff Outskirts district.

First-time visitors to Cardiff should consider a stay in the city center in hotels like Clayton Hotel Cardiff and The Safehouse Hostel. An option near the city center is Austins Guest House next to The Animal Wall. In Cardiff Outskirts district, you'll find Premier Inn Cardiff North, which offers a sauna, an indoor swimming pool and a swimming pool.

To explore the city's natural scenery, consider booking a hotel near The Animal Wall, such as Cardiff Marriott Hotel that is a 10 minutes' walk away and set next to parks and a river. One of the Cardiff's unique attractions is Ianto Jones Shrine, which you can easily discover while staying at Future Inns Cardiff Bay and Voco St. David'S Cardiff.

Luxury and boutique accommodation in Cardiff

If a fabulous luxury stay is what you're after, think of the 4-star Jolyons At No. 10, which lies within walking distance of Swalec Stadium. Visitors may also enjoy Cardiff Outskirts district, where Ibis Cardiff offers comfy accommodation of a fancy boutique hotel. Chain hotel you might consider is Travelodge Cardiff Llanedeyrn, within walking distance of South Wales Baptist College, featuring 91US$.

If you're traveling with your family around Cardiff and need a suitable apartment, opt for Max Serviced Apartments Cardiff, Meridian Terrace, just a 5-minute walk from Wahaca Cardiff restaurant. Guests planning to visit Cardiff Bay district may want to book a room at A Space In The City At Century Wharf, with rates from 120US$. Park Inn By Radisson Cardiff City Centre ranks as one of the top family hotels 0.4 miles from Cardiff center. The Angel Hotel is a 3-star resort hotel featuring a sauna and a swimming pool alongside with magnificent views.

Cardiff is a destination for modern delights.

Vivid, friendly and artistic Cardiff became all about the new after its recent change. It is here that Victorian-era buildings give way to cutting-edge technologies, restaurants, and art centers drawing a large numbers of visitors with its feel that is far quieter than London and very compact skyline.

Brimming with novelties, Cardiff has offers many comforts for your stay. Be it a room in cheap hotel in Cardiff to luxury offers all available at Booked.net. Our listings include maps, photos and secure forms to book your stay.

If you return to Cardiff Bay today, you won't recognize it as so rapid change came there. Today Cardiff is more than cultural, but political with the Welsh National Assembly based in the stunning Senned building. Along with politicking goes its sporting scene with brand-new Millennium Stadium that is the main gathering for sport fans and it means you are going to immerse yourself into the beer-perfumed atmosphere of local bars fully packed with youth.

Despite modernity took a hold onto the city, Cardiff still looks back at its history. It treasures its wealth of 19th-century prosperity that goes beyond Victorian architecture, but also to stunning examples of neo-medieval Cardiff castle and ornate Llandaff Cathedral.

Cardiff has a long history that grounds this city in the fortunes of coal dust and steel grinds. It served as the main vendor of coal and steel in the world with a turnover more than 13 million tons of coal in 1913. After Cardiff became the Welsh capital and the Victorian boom that reshaped the city, The past decade has seen new attractions, revitalized buildings and bars spring up throughout the city making it more attractive for tourists. Consequently, Cardiff exploded with foreign interest and investments to the city and these led to the development of tourism in Cardiff.

With time, Cardiff has evolved into the youngest and the most successful city projects of its kind in Europe. Just imagine that least than decade passed and Cardiff is among the most fashionable places in the United Kingdom with modern shopping centers, historic Victorian shopping arcades and world-class restaurants.

The main source of general transformation in the city first sprang up in Cardiff Bay and today the best restaurants, cafes, bars and shops inhabit this space.

Whether you are about a bohemian playground or culture, Cardiff is a perfect destination for both. Booked.net can make it easy to explore for you with a few clicks.